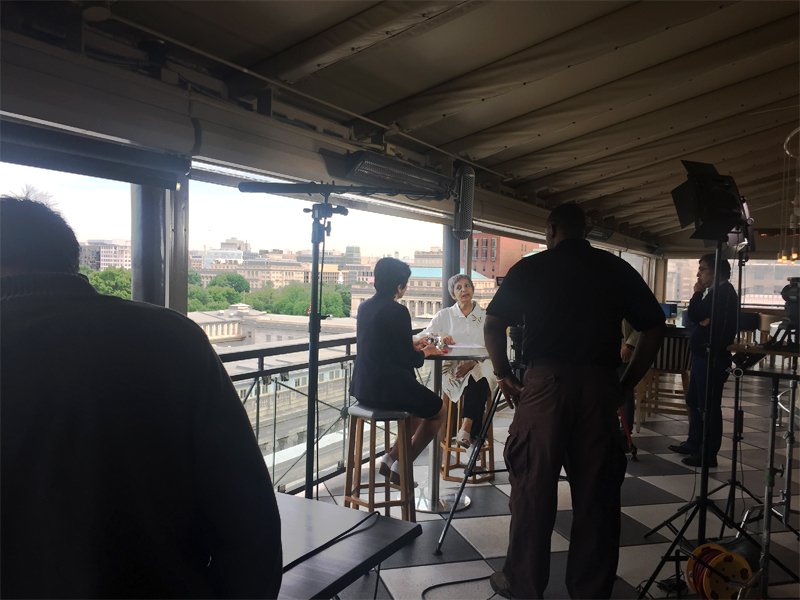 Way back when I first learned photography, and then videography, I learned how to frame a shot, the rule of thirds, the best way to frame an interview. Then of course, you begin working with professionals and they teach you even more.

For instance, how long to hold a shot for a news story or that silence creates space and tempo in documentaries. I learn a lot from the people I work with.

Teamwork and collaboration evolve into creativity, and for Alejo, the end product is always different and unique for each client. But as I’ve learned, sometimes it’s the “How” of doing things that can lead to equally creative and unique results.

Recently, I’ve been working with a foreign producer. His ideas on backdrops for interviews and talk shows are completely different than U.S. producers. We’ve all seen talk shows; usually shot in a studio, usually quiet, and in a controlled environment. However, this producer embraces the chaos of it all. He embraces the noise of a diner for a talk show; the sounds of a coffee shop and street sounds for interviews.

I thought it would be distracting, but I was wrong. In the beginning, it really bothered me to hear those noises, but as I watched the video, I realized I ignored them, as I would if I were sitting in the café. It became a part of the ambiance of the setting, which is what the producer was going for.

For American audiences, the interviewee is the focus of the frame. He or she fills the screen (60 Minutes anyone?). But audiences overseas like a wider view. And while the interviewee is the focus of the shot, the room around him or her also plays a very important supporting role. It’s a very shallow focus, so the room is blurred, but you can still see the objects. Again, I thought it would be distracting. Again, I was wrong.

I tell my clients all the time, “Think outside the box”. I did, and I opened a new avenue for creativity! As an artist and a business owner I need to embrace experiment and be open to new perspectives. This benefits me, but more importantly it benefits you – my client.

And that’s really how Alejo can make your vision real.